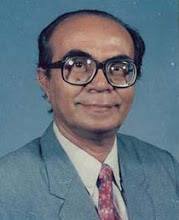 Mr. Bimalendu Barua came back Dhaka, Bangladesh from Japan 10th January, 2007 and he was injured in a road mishap on January 13 in Dhaka and admitted to the hospital where he succumbed to his injuries at around 1.20 pm at 22nd January 2007.

Bimalendu Barua, veteran journalist and chief sub-editor of The Daily Azadi, passed away at Apollo Hospitals in Dhaka at the age of 74. He left behind his wife, four daughters, a son and a host of relatives to mourn his death. His funeral ceremony held 24th January, 2008 (Wednesday) afternoon at his village home at KadhurKhil under Boalkhali upazila of the district Chittagong.

He served at the Daily Azadi for over 40 years. He was also engaged with different socio-cultural organizations and a leading leader of Buddhist community in Bangladesh. He wrote 25 books on different aspects.

Leaders of Bangladesh Buddha Kristi Prachar Sangha, Chittagong Press Club and Chittagong Union of Journalists in separate statements expressed profound shock at his death and conveyed sympathy to members of the bereaved family.