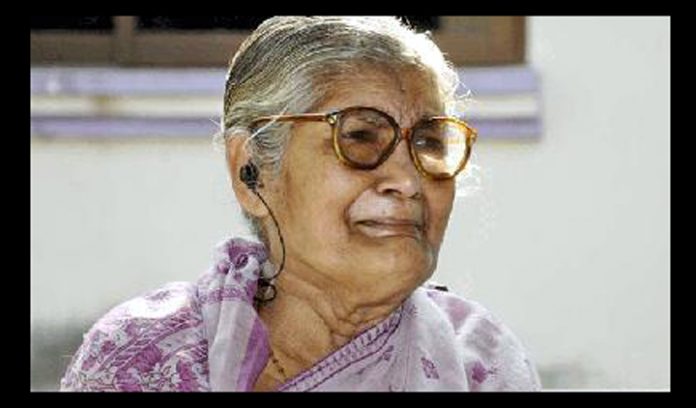 Someone who never lost an interest in learning, many years later she said in an interview, “If I ever get the opportunity, I would like to be admitted in Dhaka University again and get another postgraduate degree – this time on English literature

Born on October 14, 1941 in the village of Popadiya, Chottogram, Roma Chowdhury lost her father when she was only three years old. Despite losing the sole breadwinner of the family, her mother Motimoy Chowdhury was not one to lose hope. Against all odds, she managed to educate Roma Chowdhury, and it is for her relentless encouragement that she passed her SSC and HSC examinations. She went on to earn a degree from Chottogram College in 1959, and obtained her postgraduate degree in Bangla literature in 1961, becoming the first woman from South Chottogram to have achieved this feat from Dhaka University. Her first job after was as headmistress of the Cox’s Bazar High School, and she married while pursuing the teaching profession.

Someone who never lost an interest in learning, many years later she said in an interview, “If I ever get the opportunity, I would like to be admitted in Dhaka University again and get another postgraduate degree – this time on English literature.”

Her family succumbed to war, even after it ended

When the war was looming, Roma Chowdhury was headmistress at Bidugram High School in Boalkhali, Chottogram. Her husband left her and fled the country, leaving her and their two sons, Shagor and Togor. She went back to her paternal home in Popadiya.

On the morning of May 13, 1971, the Pakistani army raided their house with the help of local collaborators, at the end of which, she was brutally raped. It was a wound that she could never forget. Roma Chowdhury provided a detailed account of the encounter in her book Ekattorer Jononi where she wrote, “When the Pakistani army prepared to torture me, my mother and my two sons where standing by the window. Even my pet cat Konu was there. I told them to go away so that they don’t have to endure what was to follow.”

After she was raped, she fled and jumped in a nearby pond to save herself. The Pakistani army set their house and belongings on fire with gunpowder after failing to find her. A few people from her neighbourhood helped her but sadly, her own family members turned their faces away. She also wrote “… my own uncle said unfathomable words that day, enough to force me to put my hands to my ears to resist listening in shame. I couldn’t show my face, not even at the store to get food for my family.”

For the next eight months, Roma Chowdhury had to live in the woods with her old mother and her two children, and later in her burnt house, using lumps of straw as their bed. Her son Shagor was only five years old when he used to run behind processions chanting the slogan “Joy Bangla”. Both her children only just survived the war. On December 20, 1971, Shagor died after contracting pneumonia. Only a month and 28 days later, she lost her youngest son Togor as well.

Her sons never received the honour of martyrdom but to her, they were martyrs, because it was the hardships of war that killed them. She opted to bury them instead of cremating their bodies and started going bare-foot, since she could not bear the thought of walking over the earth beneath which her sons lay. No matter what she did, she could never forget her sons’ deaths. She would eventually wear her shoes irregularly on the insistence of relatives because of constant infections on her feet.

Losing both her sons in quick succession almost drove Roma Chowdhury to the brink of madness, but she was a fighter and she pulled through. She eventually remarried and had a second son Tunu, but he also died in a road accident on December 16, 1998. Such was her fate – she lost her last child on Victory Day, after which she stopped wearing shoes forever.

A birangana and broken-hearted mother who refused to give up

After the war, Roma Chowdhury pursued the career of a writer. She said, “My kushthi (vedic birth-chart) suggests that writing will be the means of my livelihood – this is perhaps, my way of trying to prove it is correct. Apart from that, there is nothing much I can do in this state. You need money to stay alive. I never liked being someone’s burden, I still don’t.”

She started writing for a fortnightly paper initially. Instead of a base wage, she used to receive 50 copies of the paper which she would sell in order to earn money. Later, she started to write her own books and sold them herself. Alauddin Khokon, the sole publisher of all her books, would continue to support her as her friend.

She survived with some Tk20,000 every month that she managed to earn after selling her own books on the streets. Although she was offered financial assistance from Prime Minister Sheikh Hasina in 2013, she respectfully declined the offer. The sight of Roma Chowdhury walking along the footpaths of Chottogram with a bag on her side and her hearing aid was one that was known to all around the city. However, with age, her health started to deteriorate.

For years, she was bed-ridden with different ailments. Some came forward to help her, others didn’t. Finally, a cabin at the Chottogram Medical College Hospital was allotted to her after government intervention. On the dawn of September 3, 2018, Roma Chowdhury left us at the age of 77.

For as long as she could remember, Roma Chowdhury fought her own battles, alone. But one thing is for certain, she was a woman who would not accept defeat – a soldier who would continue to fight no matter what. She didn’t want to leave so soon, she wished to give a lot more to her country. A witness to the atrocities during the days of war, she was a dreamer who helped others dream. She was our very own jononi (mother) – Roma Chowdhury.